Think Beyond Us: Imagining possibilities for the future
tbuESSAYS 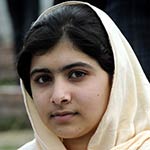 This is Malala Yousafzai. She is a 14-year-old Pakistani girl who in October 2012 was shot in the head by the Taliban for the crime of saying that girls should get an education. Her shooting prompted an enormous backlash worldwide, including--in no small measure of irony--among American politicians who belong to the same political party as legislators who say that children ought to be executed for disrespecting their parents.

I've been reading a lot lately about what seems to be two different and at least theoretically unrelated things: parasitology and ideology, specifically religious ideology. This might seem to have nothing to do with Malala Yousafzai's shooting, but it really isn't.

When I say I've been reading about parasitology, what I mean by that is my Canadian sweetie has been reading to me about parasitology. Specifically, she has read me a book called Parasite Rex, which makes the claim that much of evolutionary biology, including the development of sexual reproduction, is driven by parasites. It's been a lot of fun; I never knew I'd enjoy being read to so much, even though the subject matter is sometimes kinda yucky.

What's striking to me is that these things--religious ideology and parasitology--are in some ways the same thing in two different forms.

Parasites make their living by invading a host, then using the host's resources to spread themselves. To this end, they do some amazing manipulation of the host. Some parasites, for instance, are able to alter a host's behavior to promote their own spread. Sometimes it's as crude as irritating the host's throat to promote coughing which spreads hundreds of millions of virus particles. Other times, it's as bizarre and subtle as influencing the host's mind to change the way the host responds to fear, in order to make it more likely that the host will be eaten by a predator, which will then infect itself with the same parasite. In fact, parasitologists today are discovering that the study of life on Earth IS the study of parasites; parasites, more than any other single factor, may be the most significant determinant in the ratio of predator to prey biomass on this planet.

Religious ideology would seem to be a long way off from parasitism, unless you consider that ideas, like parasites, spread themselves by taking control of a host and modifying the host's behavior so as to promote the spread of the idea.

But what's striking to me is how direct the comparison is. The more I learn about parasites, the more I come to believe that parasites and memes aren't allegories for each other; parasites ARE memes, and vice versa.

We tend to think of parasites like toxoplasma as being real things, and ideas like the salvation of Jesus Christ as being abstract concepts that don't really exist the same way that real things do. But I don't think that's true.

Ideas exist in physical form. It might be as a series of symbols printed in a book or as a pattern of neural connections stored inside a brain, but no matter how you slice it, ideas have a physical existence. An idea that does not exist in any physical way, even as neuron connections wired into a person's head, doesn't exist.

Similarly, parasites are information, just like ideas are. A strand of DNA is nothing but an encoded piece of information, in the same sense that a series of magnetic spots on a hard disk are information. In fact, researchers have made devices that use DNA molecules to store computer information, treating banks of DNA as if they were hard drives.

In a sense, ideas and organisms aren't different things. They are the same thing written into the world in different ways. An idea that takes control of a host's brain and modifies the host to promote the spread of the idea is like a parasite that takes control of a host and modifies it to spread the parasite. The fact that the idea exists as configurations of connections of neurons rather than as configurations of nucleotides isn't as relevant as you might think.

Religion is unquestionably a meme--a complex idea that is specifically designed to spread itself, sometimes at the host's expense. A believer infected with a religious ideology who kills himself for his belief is no different than a moose infected with a parasite that dies as a result of the infection; the parasite in both cases has hijacked the host, and subverted the host's own biological existence for its own end.

The more I see the amazing adaptations that parasites have made to help protect themselves and spread themselves, the more I'm struck by how memes, and especially religious memes, have made the same adaptations.

Some parasitic wasps, for example, will create multiple types of larva in a host caterpillar--larva that go on to be more wasps, and larva that act as guardians, protecting the host from infection by other parasites by eating any new parasites that come along. Similarly, religious memes will protect themselves by preventing their host from infection by other memes; many successful religions teach that other religions are created by the devil and are therefore evil, and must be rejected.

Writers like Sam Harris and Michael Shermer talk about how people in a pluralistic society can not really accept and live by the tenets of, say, the Bible, no matter how Bible-believing they consider themselves to be. The Bible advocates slavery, and executing women for not being virgins on their wedding night, and destroying any town where prophets call upon the citizens to turn away from God; these are behaviors which you simply can't do in an industrialized, pluralistic society. So the members of modern, industrialized societies--even the ones who call themselves "fundamentalists" and who say things like "the Bible is the literal word of God"--don't really act as though they believe these things are true. They don't execute their wives or sell their daughters into slavery. The memes are not as effective at modifying the hosts as they used to be; they have become less virulent.

But new or mutated memes, like new parasites, always have the chance of being particularly virulent. Their host populations have not developed resistance. In the Middle East, in places where an emergent strain of fundamentalist Islam leads to things like the Taliban shooting Malala Yousafzai, I think that's what we're seeing--a new, virulent meme. islam itself is not new, of course, but to think that the modern strains of Islam are the same as the original is to think that the modern incarnations of Christianity are akin to the way Jesus actually lived; it's about as far off the mark as thinking a bird is a dinosaur. They share a common heritage, but that's all. They have evolved into very different organisms.

And this particular meme, this particular virulent strain of Islam, is canny enough to attack its host immune system directly. The Taliban targeted Malala Yousafzai because she favors education for women. Education, in many ways, provides an immunological response to memes; it is no accident that Tammy Faye Bakker famously said that it's possible to educate yourself right out of a personal relationship with Jesus Christ. It's no accident that Fundamentalism in all of its guises tends to be anti-intellectual and anti-education.

I'm not saying that the meme of religion (or any other meme) is inherently bad, of course. Memes have different strains; there are varieties of any large religion that are virulent and destructive to their host population, and other strains that are less virulent and more benign.

But with parasitic ideas as with parasitic biological entities, it is important to remember that the goal of the parasite is not necessarily the same as the goal of its host. Parasites attempt to spread themselves, often at the host's expense. the parasite's interests are not the host's interests. Even a seemingly benign meme, such as a meme that says it is important to be nice to each other in order to gain an everlasting reward in heaven, might harm its host species if it siphons away resources to spread itself through churches that might otherwise have been used to, for example, research new cures for cancer. At the more extreme end, even such a benign meme might cause its adherents to say things like "We as a society don't need to invest in new biomedical nanotechnology to promote human longevity, because we believe that we will live forever if we abide by the strictures of this meme and help to spread it through our works."

Virulent memes tend to be anti-intellectual, because education is often a counter to their spread. Malala Yousafzai was targeted because she represents the development of an immune response to a virulent, destructive meme that is prevalent in the environment where she was born.