Think Beyond Us: Imagining possibilities for the future
tbuSCIENCE LITERACY
STUDY PROVES THAT PLACING A PICKLE ON YOUR NOSE GRANTS PSYCHIC POWERS 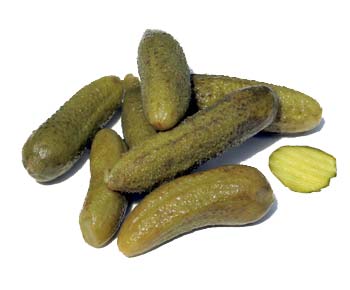 For immediate release: Scientists at the Min Planck Institute announced today that placing a pickle on your nose can improve telekinetic ability.

According to the researchers, they performed a study in which a volunteer was asked to place a pickle on her nose and then flip a coin to see whether or not the pickle would help her flip heads. The volunteer flipped the coin, which came up heads.

"This is a crowning achievement for our research," the study's authors said. "Our results show that having a pickle on your nose allows you to determine the outcome of a coin-toss."

Let's say you're browsing the Internet one day, and you come across this report. Now, you'd probably think that there was something hinkey about this experiment, right? We know intuitively that the odds of a coin toss coming up heads are about 50/50, so if someone puts a pickle on her nose and flips a coin, that doesn't actually prove a damn thing. But we might not know exactly how that applies to studies that don't involve flipping coins.

So let's talk about our friend p. This is p.

p represents the probability that a scientific study's results are total bunk. Formally, it's the probability that results like the ones observed could occur even if the null hypothesis is true. In English, that basically means that it represents how likely it is to get these results even if whatever the study is trying to show doesn't actually exist at all, and so the study's results don't mean a damn thing.

Every experiment (or at least every experiment seeking to show a relationship between things) has a p value. In the nose-pickle experiment, the p value is 0.5, which means there is a 50% chance that the subject would flip heads even if there's no connection between the pickle on her nose and the results of the experiment.

There's a p value associated with any experiment. For example if someone wanted to show that watching Richard Simmons on television caused birth defects, he might take two groups of pregnant ring-tailed lemurs and put them in front of two different TV sets, one of them showing Richard Simmons reruns and one of them showing reruns of Law & Order, to see if any of the lemurs had pups that were missing legs or had eyes in unlikely places or something.

But here's the thing. There's always a chance that a lemur pup will be born with a birth defect. It happens randomly.

So if one of the lemurs watching Richard Simmons had a pup with two tails, and the other group of lemurs had normal pups, that wouldn't necessarily mean that watching Mr. Simmons caused birth defects. The p value of this experiment is related to the probability that one out of however many lemurs you have will randomly have a pup with a birth defect. As the number of lemurs gets bigger, the probability of one of them having a weird pup gets bigger. The experiment needs to account for that, and the researchers who interpret the results need to factor that into the analysis.

If you want to be able to evaluate whether or not some study that supposedly shows something or other is rubbish, you need to think about p. Most of the time, p is expressed as a "less than or equal to" thing, as in "This study's p value is <= 0.005". That means "We don't know exactly what the p value is, but we know it can't be greater than one half of one percent."

A p value of 0.005 is pretty good; it means there's a 0.5% chance that the study is rubbish. Obviously, the larger the p value, the more skeptical you should be of a study. A p value of 0.5, like with our pickle experiment, shows that the experiment is pretty much worthless.

There are a lot of ways to make an experiment's p value smaller. With the pickle experiment, we could simply do more than one trial. As the number of coin tosses goes up, the odds of a particular result go down. If our subject flips a coin twice, the odds of getting a heads twice in a row are 1 in 4, which gives us a p value of 0.25--still high enough that any reasonable person would call rubbish on a positive trial. More coin tosses still give successively smaller p values; the p value of our simple experiment is given (roughly) by 1/2n, where n is the number of times we flip the coin.

There's more than just the p value to consider when evaluating a scientific study, of course. The study still needs to be properly constructed and controlled. Proper control groups are important for eliminating confirmation bias, which is a very powerful tendency for human beings to see what they expect to see and to remember evidence that supports their preconceptions while forgetting evidence which does not. And, naturally, the methodology has to be carefully implemented too. A lot goes into making a good experiment.

And even if the experiment is good, there's more to deciding whether or not its conclusions are valid than looking at its p value. Most experiments are considered pretty good if they have a p value of .005, which means there's a 1 in 200 chance that the results could be attributed to pure random chance.

That sounds like it's a fairly good certainty, but consider this: That's about the same as the odds of flipping heads on a coin 8 times in a row.

Now, if you were to flip a coin eight times, you'd probably be surprised if it landed on heads every single time.

But, if you were to flip a coin eight thousand times, it would be surprising if you didn't get eight heads in a row somewhere in there.

So a low p value doesn't necessarily mean that the results of an experiment are valid. In order to figure out if they're valid or not, you need to replicate the experiment, and you need to look at ALL the results of ALL the trials. And if you see something weird, you need to be able to answer the question "Is this weird because something weird is actually going on, or is this weird because if you toss a coin enough times you'll sometimes see weird runs?"

That's where something called Bayesian analysis comes in handy.

I'm not going to get too much into it, because Bayesian analysis could easily make a post (or a book) of its own. In this context, the purpose of Bayesian analysis is to ask the question "Given the probability of something, and given how many times I've seen it, could what I'm seeing can be put down to random chance without actually meaning squat?"

For example, if you flip a coin 50 times and you get a mix of 30 heads and 20 tails, Bayesian analysis can answer the question "Is this just a random statistical fluke, or is this coin weighted?"

When you evaluate a scientific study or a clinical trial, you can't just take a single experiment in isolation, look at its p value, and decide that the results must be true. You also have to look at other similar experiments, examine their results, and see whether or not what you're looking at is just a random artifact.

I ran into a real-world example of how this can mess you up a bit ago, where someone on a forum I belong to posted a link to an experiment that purports to show that feeding genetically modified corn to mice will cause health problems in their offspring. The results were (and still are) all over the Internet; fear of genetically modified food is quite rampant among some folks, especially on the political left.

The experiment had a p value of <= .005, meaning that if the null hypothesis is true (that is, there is no link between genetically modified corn and the health of mice), we could expect to see this result about one time in 200.

So it sounds like the result is pretty trustworthy...until you consider that literally thousands of similar experiments have been done, and they have shown no connection between genetically modified corn and ill health in test mice.

If an experiment's p value is .005, and you do the experiment a thousand times, it's not unexpected that you'd get 5 or 6 "positive" results even if the null hypothesis is true. This is part of the reason that replicability is important to science--no matter how low your p value may be, the results of a single experiment can never be conclusive.

That is why it is absolutely critical not to base an idea on the results of a single study. Instead, when evaluating whether a claim is likely to be true or not, look at all the studies. What's the general consensus? Is the study you're looking at a statistical artifact? Surprising results are common in studies, but they are not necessarily reliable, even if the study's methodology appears sound.